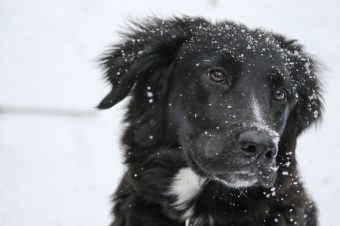 A few real-life gruesome tales from your local Dog Walkers!

The staff of One Leg Up Canine Company may be biased, but we all agree that dog walking is the best job ever. We get to be outside all day, snuggling, playing, and hiking with our favourite four-legged friends. What could be better?   It's not always just a party, though. On rare occasions we get to deal with some pretty icky situations. Dogs will be dogs, and they seem to look for any opportunity to get dirty, eat dead things, and roll in something smelly.   Since Halloween is upon us, we thought this would be a great time to share some of our more nasty stories.

Warning to any reader who may be squeamish. The stories you are about to hear are true; only the names have been changed to protect the innocent

Petey and his Pigeon

I had three dogs out at the park one afternoon, and everyone was having a lovely time. That is, until one of the pups, Petey, discovered something delicious on the ground: A decapitated pigeon! To him, it was the greatest thing he had ever found, and was bound and determined not to give it up the entire rest of the walk. Petey was quite pleased with himself, ignoring my horrified pleas and parading his find proudly in front of the other dogs. Eventually I was able to persuade him to trade me his pigeon for some liver and a really good fetch stick, but it took some serious convincing!

One of my most beautiful walk pups is a notorious poop eater. We all know it, and we all make every effort to keep Penny from enjoying that nasty treat. However, on occasion, Penny manages to sniff out a stray pile and sneak in a few good mouthfuls. On one particularly cold winter day, we were out for a hike. Everything was great until Penny discovered a treasure trove of frozen poop hidden under the snow all along the trail. (A quick pleading side note: Please pick up your dog's poop all year round!) Penny seized the opportunity and quickly gobbled snack after snack of yummy poopsicles as we rushed away from the area. During the car ride back home, I was alerted by the smell of something vile. I look in my review mirror only to see our sweet Penny projectile vomiting her poopy treats all over the backseat of the car. Floor to ceiling, seats and carpet, the poor girl covered everything. That smell was indescribable. Being that I was driving on the expressway at that moment, I was forced to just open all my windows, in a blizzard, until we made it back to her house. Luckily Penny girl was completely fine after emptying her stomach in the car, and then I got the fun task of cleaning up the car. Yuck!

I was walking Darla in a beautiful, open field and she was running happily through the long grass. No one was around, so I let her stretch her legs and do all the sniffing she liked. When it came time to call Darla back, she was slow to lift her head and look at me, but when she finally did, I could see the glee in her eyes—and something in her mouth. Darla proudly trotted up to me to present the prize that she found. To my horror, it was the head of a baby deer, the fur still visible on the bones!! Even though she was super proud of her find, Darla must have been able to see the disgust on my face and hear it in my voice, because after a short time, she dropped the carcass and we continued on to enjoy our walk - deer head free.

The Bunny that Followed us Home

One morning I was out on a group walk with four happy and energetic dogs. The dogs were romping around, having a great time playing chase and teasing each other with sticks. Things changed, however, when one of the dogs made a gruesome discovery in the long grass. The other pups quickly caught wind of the find, and they all started grabbing for a share of the treasure. I approached to see what they had found, and saw they were arguing over a rabbit, which had been long dead! It was obvious there was no chance that any of these dogs were going to drop the poor deceased bunny.  I didn't want them to eat any of it, so I took out a poop bag, put it around my hand, and grabbed for the rabbit. After a quick tug-o-war, I won and securely tied the bunny inside the bag where it stayed with me for the entire rest of the walk. When we got back to the car I was faced with another problem. There were no garbage cans on this trail. Not wanting to dump the bag where another dog might find it, the bag came into the car and stayed there for several hours until I was able to track down a garbage can. Those poop bags are not air locked, so my car smelled pretty ripe for the rest of the day!We hope you've enjoyed hearing a little bit about the darker side of dog walking. We love our job, and luckily there are always more wonderful moments than there are terrifying ones, but the terrifying ones make for good stories!   Happy Halloween!

Discover the difference in your dog, get started today!